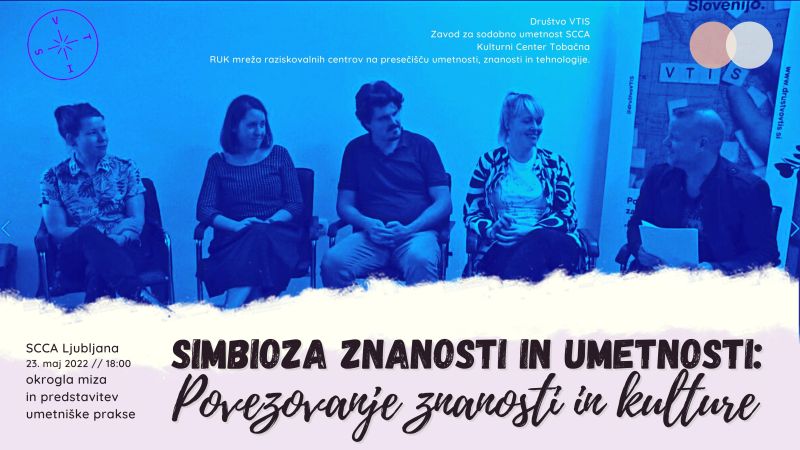 Conference of the Cultural Collective of the Society VTIS (A world-wide community of experts, pioneers and researchers committed to promoting the circulation of Slovenian knowledge.) entitled Symbiosis of science and art: Connecting the scientific and cultural sectors was organized on Monday, May 23, 2022 at 6:00 p.m. in the premises of the Institute for Contemporary Art SCCA-Ljubljana (Project Room , Metelkova 6, 1000 Ljubljana).

In the introductory part of the event, the member of the VTIS Association, multimedia artist Valerie Wolf Gang, presented her exhibition “The Beautiful Face of Artificial Intelligence” – her artistic practice in the field of multimedia & contemporary arts and her cooperation with scientific institutes where she participates in the work of scientists and other experts in the field of artificial intelligence. intelligence, computer science, and modern technologies. After the presentation, a panel took place on the topic “Connecting the scientific and cultural sector; operating at the intersection of science and art”, in which was discussed the possibilities of cooperation between two different work methodologies and how these two industries can complement each other. Guests shared their operational experience and a view of mutual sectoral integration, which in many projects led to interesting results and mutual support in research and promotion of innovative ideas that open up new possibilities for research and practical implications.

At the event, examples of good practices were talked about in the global and national sense, and the focus on topics such as activities in the field of connecting the cultural and medical sectors, the field of development of robotics, artificial intelligence, modern XR technologies in the research and work phase of scientists, and the creative management of larger collectives, where different profiles of collaborators are needed for organized and successful work on complex international projects.

Program of the event:

1. INTRODUCTION TO THE EXHIBITION: “The Beautiful Face of Artificial Intelligence” and presentation of artistic practice

2. PANEL: Connecting the scientific and cultural sectors; operating at the intersection of science and art

1. INTRODUCTION TO THE EXHIBITION: “The Beautiful Face of Artificial Intelligence” and presentation of artistic practice

In the introductory part of the meeting, the artist Valerie Wolf Gang will present the intermedial exhibition “The Wonderful Face of Artificial Intelligence”, which will present her artistic practice in the field of intermedial arts and her cooperation with scientific institutes where she participates in the work of scientists and other experts in the field of artificial intelligence. computer science and modern technologies.

We will take a look at a selection of her works, which were exhibited in the gallery Kulturni Center Tobačna 001. The research practice of the artist Wolf Gang focuses mainly on the themes of space, body and identity, which was also marked by a strong personal life experience, which she includes in her research and through a narrative story, it brings the coexistence of man and technology closer to the public, which complement each other and harmoniously create a new world, our future.

More about the exhibition: https://mgml.si/sl/center-tobacna/razstave/601/valerie-wolf-gang/

2. PANEL: Connecting the scientific and cultural sectors; operating at the intersection of science and art

After the presentation of artworks by Valerie Wolf Gang, a panel will take place on the topic “Connecting the scientific and cultural sectors; operating at the intersection of science and art”, in which we will discuss the possibilities of cooperation between two different work methodologies and how these two industries can complement each other. The guests will share their operational experience and their view on mutual sectoral integration, which in many projects has led to interesting results and mutual support in research and promotion of innovative ideas that open up new possibilities for research and practical implications.

We will mention examples of good practices in the world and at home, and we will focus on topics such as activities in the field of connecting the cultural and medical sectors, the field of development of robotics, artificial intelligence, modern XR technologies in the research and work phase of scientists, and creative management of larger collectives, where they are needed different profiles of colleagues for organized and successful work on complex international projects. We will be interested in what is the practice of major scientific institutes that regularly invite artists to participate in artistic residency programs, where two different worlds meet, intertwine and together we overcome all challenges that lead to new scientific discoveries or to new development possibilities within complex research methods of work; the perspective of a scientist and an artist that becomes a whole.

Docent in the field of biochemistry at the Faculty of Chemistry and Chemical Technology of the University of Ljubljana (UL FKKT). After her diploma and doctorate at UL FKKT, she completed two years of post-doctoral training at the University of Umeå in Sweden. In 2019, she was selected as the sole representative of Slovenia at the FEMS (Federation of European Microbiological Societies) summer school, to which 25 of the most promising young researchers in the field of microbiology from around the world were selected. She is an active member of the VTIS association, and a scientific mentor at the ASEF Foundation (the American Slovenian Education Foundation, USA), which aims to strengthen the connections of Slovenian researchers between the USA and Slovenia, and one of the founders of the Cutting Edge association, which aims to promote science among young people in science .

Valerie Wolf Gang (SI) is an intermedia artist, director, video maker, transdisciplinary art researcher and educator. He researches the relationship between man and technology, participates in international research organizations, and exhibits his works internationally (Weltmuseum, Vienna; Institute of Contemporary Art, Singapore; Center for Contemporary Art, Portugal: Expo Garden, Beijing; Qubit, New York ). She is the winner of numerous prestigious scholarships and awards (Mr. Ivana Kobilca award for current production, Fulbright Award, Vesne for the best student film, Darmstädter Tage der Fotografie, International Brain-Computer Interface Art Award, The Future of Innovation Award) and the founder of UV Arthouse, which produces experimental films, video installations and explores the field of new media. Lecturer on contemporary artistic practices and film, she is a doctoral candidate at SAZU, a professional associate at the Institute of Fine Arts in Vienna and the Center for Artificial Intelligence in Germany, a mentor in the program of the Center for Creativity of the Republic of Slovenia and works under the auspices of the RUK research center. She often participates in international film and new media festivals as a member of the jury, and is often a guest at world conferences whose theme is digital media at the intersection of science and art.

Maša Jazbec (SI) is an intermedia artist and researcher. She holds a PhD in humanistic informatics from the University of Tsukuba (Empowerment Informatics program) and a master’s degree in interactive art from the Interface Culture program at the University of Art and Design in Linz, Austria. She was a visiting researcher at the ATR Hiroshi Ishiguro Lab in Kyoto, Japan. Her projects, exhibited as works of art, have always shown her understanding of new media as an exploratory artistic practice, arising from artistic and scientific thought related to current conditions in contemporary society. Her most recent research interests focus primarily on robotics and android science. She presented her research at conferences such as Computer Human Interaction 2016, Human Robot Interaction 2017,

Žiga Pavlović (alias Darian Medved/Ljubljana, 1987) is an independent interaction designer, programmer, maker and promoter of new technologies. Most of his work relates to the field of virtual, augmented and mixed reality, and since 2019 also to the field of practical artificial intelligence, “affective computing” and interactive installations. As a mentor, he cooperates with Fablab Maribor in the preparation of DIY workshops and education in the use of digital fabrication. In the past, he participated in the establishment of the Association of Game Developers of Slovenia and the organization of the first two conferences on game development in Slovenia, the Slovenian Games Conference. You’ll still find him at the occasional Game Jam or hackathon exploring a new digital toy. In this way, by winning the EYA Game Jam in Graz in 2017, he participated in the World Championship in the development of VR content in Shanghai.

Simon is a graduate of York University in Toronto, and currently works as a consultant for business networking and internationalization in the field of economy and culture. During his studies, as the founder and president of the Final Flash (FFA) association, he and his team developed artistic and entertainment events and educational projects in Slovenia, Great Britain, Canada, Israel and South Africa, and many also remember him from those times as an artistic manager and coordinator of the program at the Ambasada Gavioli discotheque. After completing his studies, he worked for several years in marketing, communications and corporate relations in various organizations in Toronto with projects for clients such as Sony Canada, Dell Computers, TD Bank, Goodyear, Toyota, Colgate/Palmolive, Dunlop, Fiat, Rogers Communications , Panasonic Mac’s, Research in Motion… From 2014 to 2017, Simon led the Canadian Slovenian Chamber of Commerce in Toronto as executive director. Since 2017, he lives and works in Slovenia, and works in the field of economic, academic and cultural integration between the two countries.