Exhibition is dedicated to Marjana and Vojko Spačal.

Symbiome – the Economy of Symbiosis is a biological prototype of a complex system of social relations between different species that enter into symbiotic relationships under favorable conditions to reciprocally satisfy a need.

Miniature ecosystem Symbiome is populated by two biological species living in a symbiotic relationship: a red clover plant, Trifolium pretense, and bacteria of the genus Rhizobium. Lighting and aerating the hydroponic solution create favorable environmental conditions in a system that benefits both species. Crucial nutrients are exchanged in the symbiotic relationship: the plant provides carbon compounds to the bacteria, and the bacteria nitrogenous compounds to the plant. Rhizobia fix nitrogen from the air, which lowers the pH of the solution around the clover’s roots, making it more acidic. Plants need fixed atmospheric nitrogen, not readily available in nature, for growth and basic processes such as the production of amino acids, proteins, and DNA. The symbiosis between plant and bacteria enables the survival of both, and, as a consequence, the development of bigger and more extensive ecological connections.

The relationship between the red clover and rhizobia is determined by a biological feedback system that ensures the survival of both species. The more acidic the hydroponic solution, the better the conditions for growth and symbiosis. Indirect measurements of the levels of nitrogen fixation in the hydroponic solution in the Symbiome installation affect the speed of the dripping of water. The greater the symbiosis, the faster the flow of water, and the more intense the ripples on the water surface created by the drops. The ripples on the water surface are detected by a light sensor, which transforms the symbiosis into sound via an interface. The sound is generated and filtered in real time by way of a phase modulation that maps, depending on the temporal and spatial situation, matching and differences in the process of symbiosis. Symbiosis is not an idealized relationship, but rather a situation in which different species incessantly negotiate the mutual use of natural resources. The environment is not something external; it is generated through relationships, and also constitutes a part of such relationships. As such in the Symbiome installation the visitors exhaling carbon dioxide also become remote agents in the focal symbiotic relationships.

Red clover and rhizobia also constitute a part of the human symbiotic relationship in the food production process. Agronomists value red clover for its role in the rotation of crops, since its symbiotic relationship with rhizobia gives it the power to enrich depleted soil with nitrogen. Initially, rhizobia enter the plant as parasites, but due to the mutual benefits that arise between the species this relationship then transforms into a symbiotic one. Nodules develop on the clover root system, which the rhizobia colonize. The clover thus provides good conditions for the survival of the bacteria – giving them a home. Such symbiosis can also be read as a metaphor for the economic relationships between native inhabitants and migrants, which can only be beneficial for both groups when based on reciprocity. The sound waves in the installation are an analogy for the production of cultural content that is not based on the dichotomy between a dominant culture and various forms of minority cultures. A mutual cultural continuum is only possible when society understands that the goal of symbiosis is not only an economic relationship, but also the production of cognitive processes.

The contemporary market economy favors predation and competition among species, neglecting other relationships, such as symbiotic existence and cooperation. It is based on an erroneous understanding of evolutionary processes that reduces their many varied forms to the idea of struggle for survival. Dialectic Marxism also promoted class struggle rather than a classless socialist society, ostensibly to end the oppression of the deprivileged at the hands of the privileged. This reflects a mistaken understanding of evolution as a process of struggle for survival. Class struggle did not ultimately lead to a classless society, but rather to violence, the reinstatement of capitalism, and re-traditionalization. Successful evolutionary interspecies processes do not involve struggle but mutualism, cooperation, and negotiation. Symbiome – the Economy of Symbiosis poses the question of how to think of systems of injustice and inequality in society from the perspective of forming mutualistic relationships instead of widening the chasms among us.

The exhibition also includes six videos representing the concept of Connections Continuum from Saša Spačal and her collaborators’ previous installations. (7K: new life form, Mycophone_unison, Myconnect, Liminoid, and Syncness). The artist uses this concept to highlight various aspects of the post-humanist planetary worldview, transcending disciplinary divisions between humans, nature, and technology. She develops prototypes and sensory interfaces for communication between biological, technological, and cultural species based on hybrid formations and reaching beyond the anthropocentric perspective. 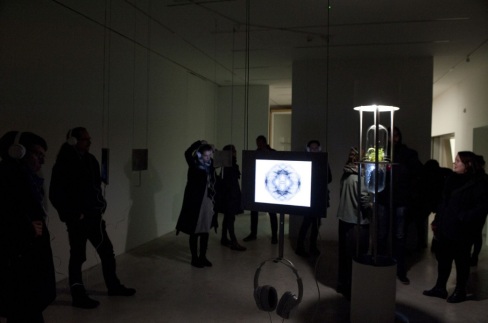