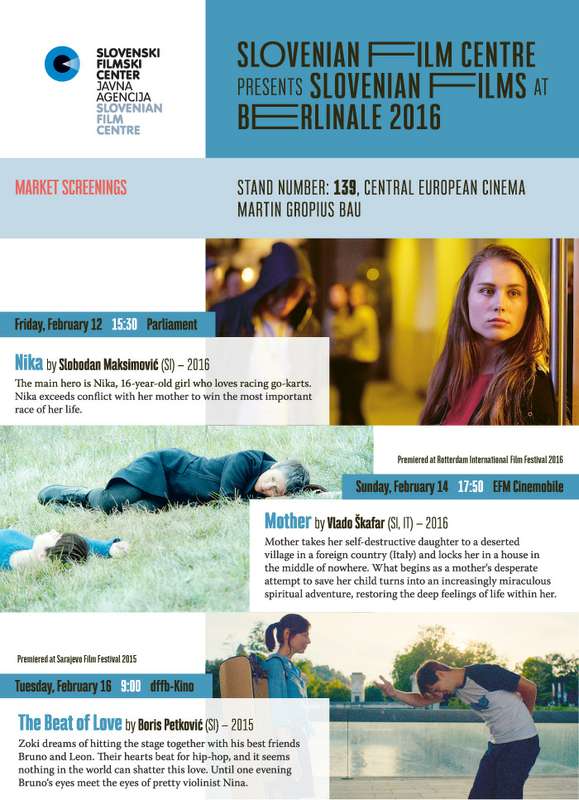 The 66th Berlin Film Festival is taking place between 11 and 21 February. The Slovenian Film Centre (SFC) will once again present itself in the Martin Gropius Bau building,home of the Berlin Film Market, where it is going to provide information about Slovenian films to the festival selectors, buyers and journalists.
In 2016 the Slovenian Film Centre will celebrate the eleventh year of its joint presentation with the Czechs and Slovaks under the CEC – Central European Cinema trademark.
On Friday, 12 February, the film Nika by the director Slobodan Maksimović will be screened at the Market in order to search for successful festival and distribution options abroad. The film tells the story of the sixteen-year-old girl Nika, whose biggest wish in life is to race a go-kart, while her mother does not see this as a very good idea. The Slovenian premiere of the film will take place in September at the Festival of Slovenian Film.
On Sunday, 14 February, the film Mother by the director Vlado Škafar will also be presented at the market after its successful world premiere on 3 February at the festival in Rotterdam. The film will be intended for all the festival selectors who might have missed it at the screenings in Rotterdam. The Cineurope critic has already described the film as a “cinematic poem about mother and daughter”.
On Tuesday, 16 February, the film The Beat of Love by the director Boris Petković, whose world premiere took place at the last festival in Sarajevo, will also have its first market screening. The sounds of the rap scene, dominated by Bruno, Zoki and Leon, will also be heard in Berlin.
The 2016 Film Guide (covering full‑length live‑action and documentary films) will be presented, while short films will be covered, for the third year in a row, in the separate short film guide, already presented at the short film market in Clermont Ferrand a few days ago.
On Saturday, 13 February, all three countries are organising a joint opening reception at the HomeBase club, where apart from images from various films national wines will also be presented. Slovenia will be represented by white and red wines from the Littoral region (Černe).
Numerous other events will accompany the Berlin Festival and Market. Already for the thirteenth year the Berlinale Talent Campus will keep discovering new film authors from all over the world. This year the director of photography Mitja Ličen, who has worked on films like The Tree (2014) by the director Sonja Prosenc (last year’s candidate for the foreign-language film Academy Award), Who’s Afraid of the Big Bad Wolf? (2012) by Janez Lapajne and We’ve Never Been to Venice (2008) by Blaž Kutin, has qualified for the Talent Campus.
The representatives of the Slovenian Film Centre will be present at the Film Market between 11 and 17 February.

In the context of this festival the film market of short films, where this year the Slovenian shorts will be presented for the second time, will also take place between 2 and 6 February. Just as last year the Slovenian Film Centre will share its stand with the Croatian Audio‑Visual Centre. Both institutions will also have the same visual identity. The concept of both main institutions in the audiovisual field in Croatia and Slovenia is regional integration, taking place in the field of production as well as promotion.

Slovenian Film Centre will not be the only Slovenian institution to be presented at the largest festival short film market in Europe: it will also be joined by the International Animated Film Festival Animateka and the Kraken Film Society, endeavouring to affirm and promote short films as an independent film form. One of the goals of the Kraken Society is to establish a regular programme for the cinematographic screening of short films and educate the interested public in the special aspects of this diverse film form. The Society actively cooperates with filmmakers, theoreticians, producers and short film distributers in Slovenia as well as abroad, and strives to ensure a greater recognisability of shorts in Slovenia and elsewhere.

Slovenian Film Centre has just published a short film catalogue (entitled Shorts) as well, presenting as many as 24 films finished in 2014 as well as announcing those that are to be finished in the spring. The works include eleven live‑action films, four documentaries, four animated and five experimental films. The catalogue also contains a DVD of the already completed shorts.