Photos from exhibition opening Words as Colours, Colours as Words*. Exhibition opened in August 2015 in Ptuj, in January 2016 it will be hosted in gallery Vodnikova domačija in Ljubljana (more information will be announced soon, exhibition webpage: CLICK) 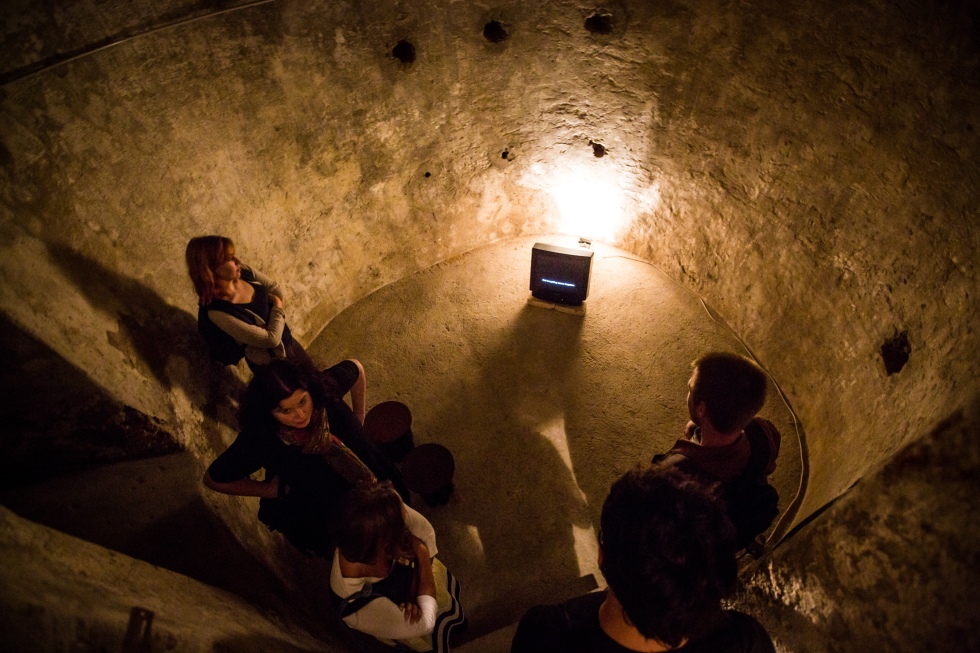 Our Greeting!
In 1927, Avgust Černigoj put forth a magnificent salute to the TANK international magazine for new art. His salute calls for a new art, for the beauty of a new religion and a new kind of justice. Černigoj’s hymnic address, published in 1½th issue of TANK, used graphic emphasis (exclamation marks, brackets, underlined words) to announce that the time has come for the collective creative expression of the coming generation. This was early 20th century, the time of the Slovenian historical avant-garde and a time when the country joined the revolutionary aesthetic trends that were being developed across Europe. In Slovenia, cosmopolitism was mainly the work of individuals who actively laboured to combine different artistic practices (music, literature, theatre, fine arts and applied arts) and whose vision inspired their contemporaries – as well as all future generations.
Anton Podbevšek (1898–1981) was one of the main instigators and members of the Novo mesto Spring movement, while Avgust Černigoj (1898–1985), a former student of the Weimar-based Bauhaus school, introduced his circle in Trieste to the concept of a total work of art that would combine various media with extraordinary philosophical insight and political commitment. And Srečko Kosovel (1904–1926), the “poet of the Karst”, is perpetually in the midst of a personal renaissance – his political and humanitarian attitude shows us today how to be a person among people. The work of all three consistently combines words with their images, letters with lines, the poetic with the graphic. And this is precisely the spot where we anchor Our Greeting!, hoping to rekindle the subversive spirit of the Slovenian avant-garde, to introduce younger generations to the forthright, inquisitive attitude of its artists and to provide the audiences of the Days of Poetry and Wine 2015 with a look at a different, visual kind of poetry.
The exhibition (prepared by the SCCA, Center for Contemporary Arts – Ljubljana) is third in a series looking into the relationships between visual art and literature. The present edition tips the scales towards authors and poets. Our selection of works was also determined by the interior of the Old Glassware Workshop with its patina of the past, by formal and substantial similarity of artworks, and, last but not least, by the availability and integrity of materials, which are often difficult to acquire or altogether lost. The exhibition is neither retrospective nor thematic (exhibitions of this type showcasing visual and concrete poetry are regularly hosted by Miloš Bašin, curator and head of Bežigrad Galleries 1 and 2 in Ljubljana); perhaps it would be most accurate to call it associative, by its curatorial approach that reveals connections between the literary and the visual from the mid-1920s, when the first works displayed at the exhibition were created, to present time, represented by a project created specifically for the festival by Maja Burja.
The exhibition is introduced by My Greeting! (Moj pozdrav!) by Avgust Černigoj, supported by a selection of proclamations and manifestoes by some of the contributing artists. Maja Burja approaches this context with a situation titled (Ante)chamber
((Pred)prostor, 2015). We have invited the artist to engage in a dialogue with the avant-garde masters, to present the ways in which the youngest generation of artists “thinks the avant-garde” and determine whether it is even possible to be “a visionary and a rebel” in today’s unfriendly circumstances of cultural production. Her response is minimal in form. Her work consists of text fragments in the form of individual postcards that the visitors can take with them and of a sign above the entrance to the exhibition hall that allows for intervention as well.
This initial “confrontation” is followed by the Flying Ship (Leteča ladja, 1926), a collage by Srečko Kosovel, and Constructivist Poem (Konstruktivistična pesem, 1927) by Avgust Černigoj that demonstrate the collage procedure using newspaper clippings and typographic variation. Černigoj explored typography all his life – using, among other things, the prints and collages exhibited here (1955–1980). On the other hand, the sound recording of Anton Podbevšek reading his poetry is here to present the performativity that Podbevšek used in 1920 to stir up attention of the public in Novo mesto and Ljubljana.
The third part or period of the exhibition dates to the 1960s, which was the time of the first publications that approached the issue of crossing the lines between different artistic practices and connecting them in total works of art. These included the exhibited EVA collection (OHO editions, 1966). The Tribuna student newsletter was another venue for poetic experiments; visual poems Door (Vrata), Scissors (Škarje) and Skyscraper (Nebotičnik), all from 1967, by Matjaž Hanžek are exhibited both in the original version and as they appeared in Tribuna. Furthermore, Hanžek’s Skyscraper has by now acquired a kinetic dimension as well: Alenka Pirman included the poem in her series The Most Beautiful Poems (Najlepše pesmi) and used new technology (Powerpoint) to animate it as a tribute to the former “rational poetry of the future”.
Nowadays, with our time filled with technology, poetry is able to inhabit videos and the web, as well as public spaces as performative, cross-media readings. Jaka Železnikar uses electronic poetry to present Šalamun’s verses (co-author Andrej Hočevar, 2015) and a portrait of Srečko Kosovel (2004) created in 1926 by none other than Avgust Černigoj. Primož Čučnik, Gregor Podlogar and Žiga Kariž have laid out their visual-audio-semantic project Ode on Manhattan Avenue (Oda na manhatnski aveniji, 2003) as a site-specific installation, while Zoran Srdič Janežić (Scribbled Words (Počečkane besede, poetry by Jana Putrle Srdić, 2005)) and Valérie Wolf Gang (Distant Memory (Oddaljen spomin, 2014)) transform poetry into moving pictures and video-poetry. Wolf Gang took poetic narration allowed by the camera onto the mysterious Galeb (Seagull), a ship that started her life as a banana freighter and was then turned into a military cruiser, Tito’s protocol boat and finally into a training ship. Today, the ship is abandoned and anchored in the port of Rijeka. Kosovel’s ship, on the other hand, has fortunately managed to take to the skies.
Dušan Dovč 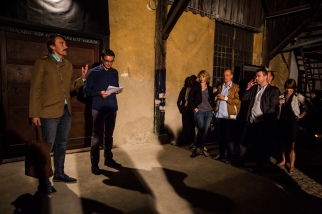 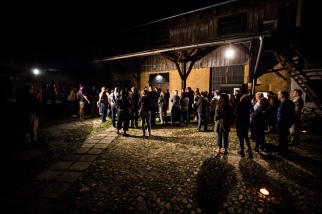 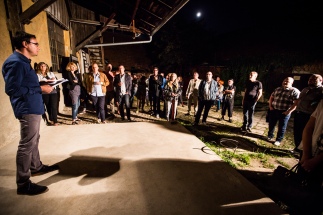 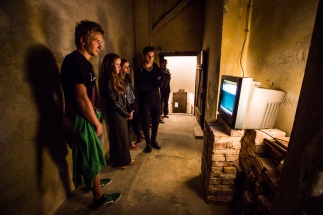 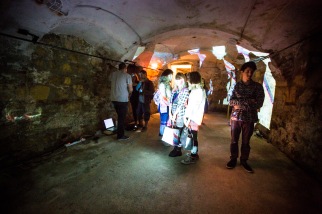 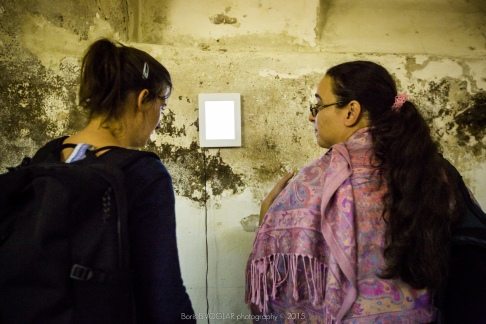 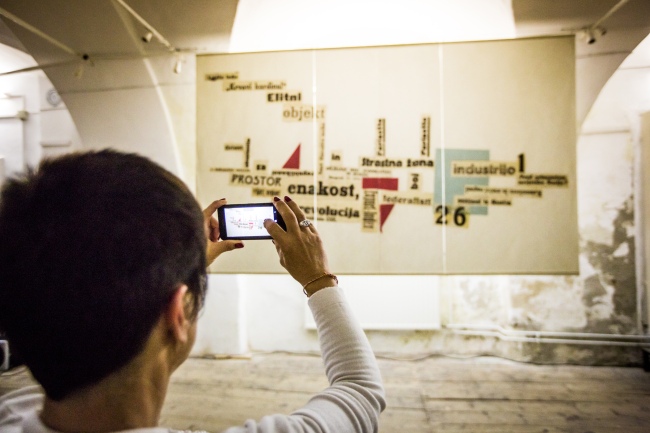 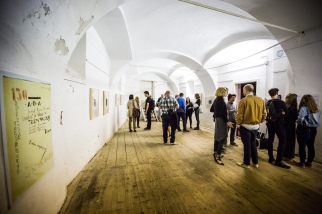 Photos from the opening, photo: B. Voglar photography