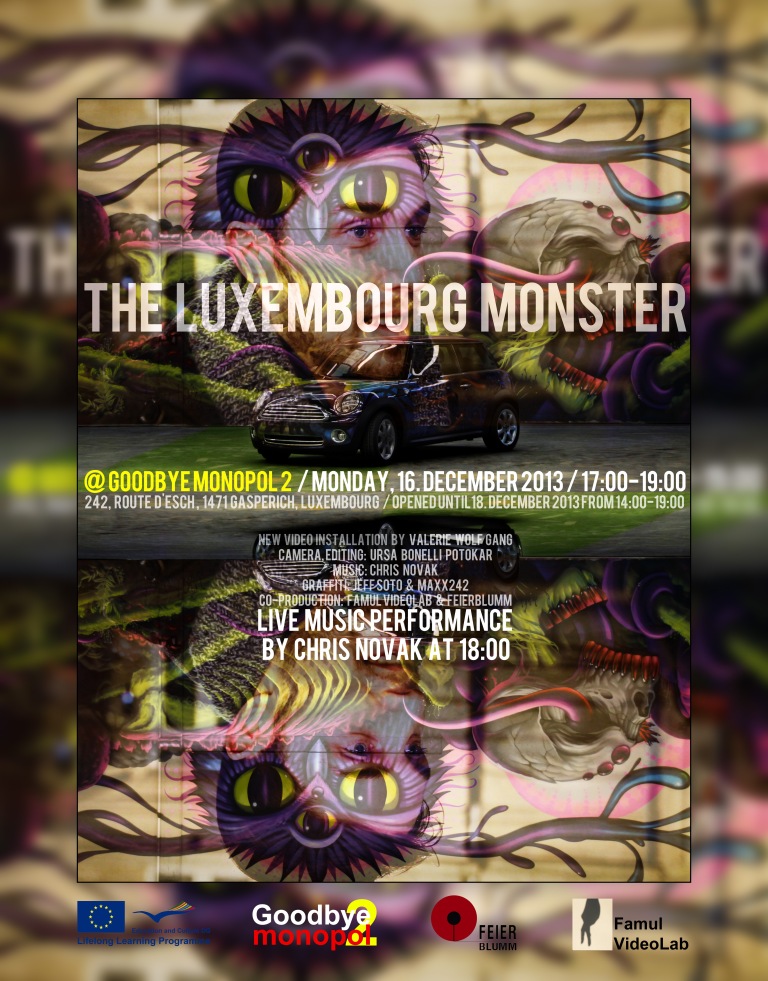 OPENING OF THE EXHIBITION

Special event on the opening: LIVE MUSIC PERFORMANCE BY CHRIS NOVAK on marimbas @ 18:00

“The Luxembourg monster” is a video installation which combines different artistic techniques (graffiti, video, sound). It is also an art piece which plays with the perception of the public: what is the actual monster in the installation? Artists Valerie Wolf Gang researches new surroundings and culture in Luxembourg and questions locals about the personal and economic problems they face in their country. As a representative democracy with a constitutional monarch, Luxembourg is headed by a grand duke and is the world’s only remaining grand duchy. Luxembourg is a developed country, with an advanced economy and the world’s highest GDP (PPP) per capital, according to the World Bank. Its historic and strategic importance dates back to its founding as a Roman era fortress and Frankish count’s castle site in the Early Middle Ages. It was an important bastion along the Spanish Road when Spain was the principal European power influencing the whole western hemisphere and beyond in the 16th–17th centuries. Luxembourg is a member of the European Union, NATO, OECD, the United Nations, and Benelux, reflecting the political consensus in favor of economic, political, and military integration. The city of Luxembourg, the largest and capital city, is the seat of several institutions and agencies of the EU. Short interviews with the locals will reveal if the situation is as good as the statistics or if there is something the public should know. Monster is a metaphor for the real life problems and the aim of the video installation is to find that monster and present it to the public with a real visual appearance and sound.

MORE INFO ABOUT THE ARTISTS